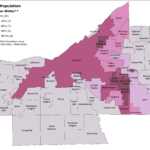 1. Census 2000 counts are as published in Census 2000 reports and thus do not include any changes
published subsequently due to boundary changes or to the Count Question Resolution program.